License plates of Monaco have four blue characters on a white background. At the left side of rear plates is a validation sticker with the coat of arms of Monaco, the year of validity and the letters 'MC'. Front plates, which are smaller than rear plates, have a smaller sticker with the coat of arms and 'MC'. Rear plates also have the text 'PRINCIPAUTE DE MONACO' at the bottom of the plate. The registration is composed of four numbers or three numbers and a letter. Motorcycle plates look similar, but they are smaller and the registration contains two letters and two numbers.

Several letters in the registration are used to indicate a special class of vehicle, as listed in the following table. Otherwise the plates are identical to the regular plates.

Diplomatic plates and plates for other officials look identical to regular plates, but follow a different registration system:

The Prince of Monaco has blue on white plates similar to the normal series, but on the left side is a royal crest instead of the coat of arms. The registration consists of the letters MC, MP or PM followed by two numbers.

Temporary transit plates have red characters instead of blue and begin with the letters TT ('transit temporaire') followed by two numbers. These plates are used on vehicles belonging to people who stay in Monaco only temporarily.

Provisional plates are blue stickers with white characters. The registration has four numbers (or two letters and two numbers for motorcycles) followed by WW or WW2 and ends with the letters MC. The WW series is intended for new or second-hand vehicles requiring registration in Monaco or in France. The WW2 series is intended for new vehicles purchased duty free or used vehicles exported to countries other than France. 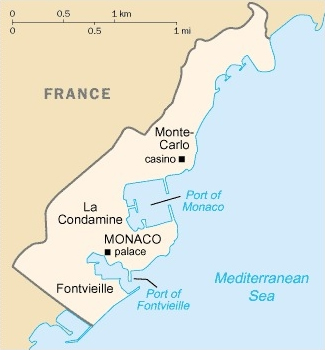 Monaco is a microstate in Western Europe. It borders the Mediterranean Sea on the southern coast of France, near the border with Italy. Monaco is the second-smallest independent state in the world (after Vatican City). The mild climate, splendid scenery, and gambling facilities have made Monaco world famous as a tourist and recreation center.